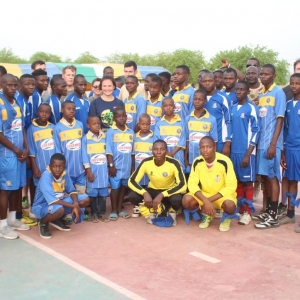 A Shropshire based charitable appeal that delivers ‘Aid through Football’ has completed its most successful year to date.

The Royal Air Force Shawbury based Taking Football to Africa and beyond Charitable Appeal ended 2018 having delivered football kit to 18 countries worldwide over 34 deliveries.  The Appeal, run by Wing Commander Neil Hope MBE, has been operating from the North Shropshire airbase since 2006 and collects donated football kit before re-distributing them to children and adults across the globe.  Since its inception the appeal has delivered over 218000 items of football kit and other items to people in 56 countries and in 2018 the appeal completed its most successful year to date by delivering over 31500 items.

Neil said; ‘it has been a hugely successful and busy year.  2017 ended with a delivery visit to Nepal and we quickly began deliveries in earnest in 2018.  We have delivered items across the globe including to the refugee camps in Turkey and Syria, to islands in Indonesia and to many countries across Africa and the Americas.  We also assisted with items for children in Belarus, affected by the Chernobyl disaster and made many deliveries into Kenya.  At Easter we took 11 people to Kenya to deliver thousands of items of kit including in the large slum areas of Kibera, Kibagare and Mathare, whilst celebrating the 100thbirthday of the RAF.  We also continued to help numerous other charities with items of kit.  We have been shocked by the fantastic assistance given to us, through donations, from many outlets and especially member clubs of Sheffield & Hallamshire County FA, Hampshire FA, Leicester City and Manchester United.  As always, we have also had extensive assistance from Shrewsbury Town FC, through our fabulous links between the club, RAF Shawbury and RAF Football.  In February we will again travel to Kenya to make deliveries with a team of 11 people delivering ‘Aid through Football’.

The appeal continues to collect and re-distribute kit. More information can be received through Neil at neil.hope684@mod.gov.uk